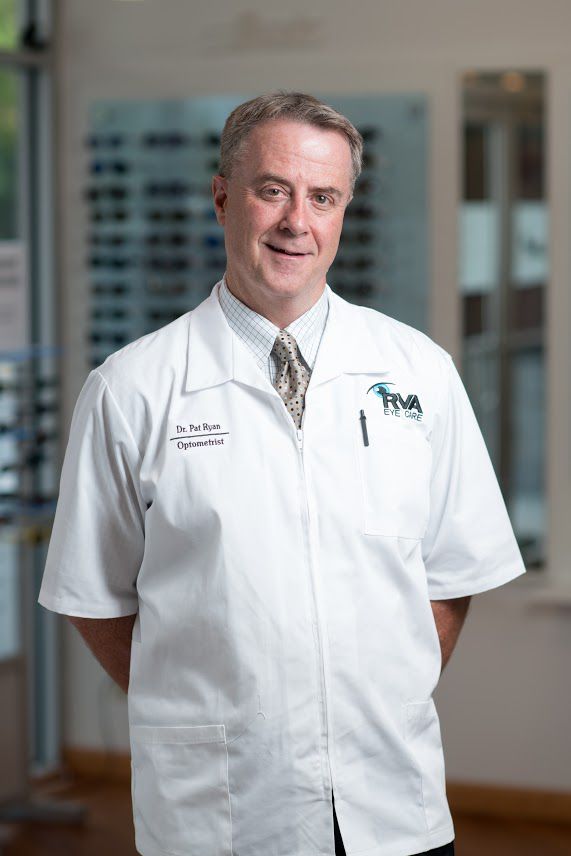 Dr. Patrick Ryan is an Illinois native and earned his B.S in biology from Southern Ill. University. He obtained his Doctor of Optometry from the University of Houston where he was a Beta Sigma Kappa honor student. His first position was with Warren Cross, M.D. in Houston, a complete eye care facility with in-house refractive and cataract surgery. While there Dr. Ryan enjoyed the opportunity to work with some of the leading refractive surgeons in the country.

In 1986, Dr. Ryan and his wife moved from Texas to Richmond, Virginia to raise their family. He decided to open his own office so that he could offer friendly, personal care that would reflect this goal. He opened a second location, Drs. Rainer and Ryan, across from Virginia Center Commons Mall in 2000 with Dr. Bob Rainer. The third location was formed in 2017 when Dr. Bob Rainer merged his own long standing office with the group. This office is at the corner of Libbie and Broad.

He has extensive experience in managing pre- and post-operative refractive surgery patients, as well as determining candidacy and setting realistic expectations of patients desiring refractive eye surgery. Dr. Ryan genuinely enjoys seeing his patients experience the benefits of improved vision. He is very interested in the medical and optical problem solving nature of the profession. He was voted as one of the top optometrists for "chair side manner" in the Richmond area.  The survey was done in the December 2014 issue of Our Health Magazine.

His other passions include swimming, biking and running.He has had numerous top places in the Great Chesapeke bay swim across the bay.  As a triathlete he is very familiar with sports vision needs. He has twin adult children and two dogs. He enjoys traveling with his wife and kids. He has a passion for glass blowing, which he has been doing the past several years. His website for his artistic side is PatRyanglass.com  He works out the The Glass Spot in Richmond VA. Dr Ryan is familiar with the needs of pilots, his son is a marine fighter pilot. He has flown with him over the years and is up to date on the visual needs of that field. His daughter Calli is a professional artist, visit her web site, Calliryan.com.  She is available for commissioned works, portraits, and business art consulting. Dr. Rainer is a Richmond native. He attended J.R. Tucker High School, and then University of Richmond followed by VMI on wrestling scholarships. He is in J.R. Tucker's Sports Hall of Fame. He is a 1989 graduate of the Pennsylvania College of Optometry in Philadelphia where he was awarded clinical honors.

He has owned "West End Eye Care" since 1990 and has partnered with Dr. Pat Ryan since 2000 at "Drs. Rainer and Ryan." On January 1,2017 they unified and renamed all 3 locations under the new name "RVA Eye Care." Dr. Rainer has been a member of the American and Virginia Optometric Associations and Richmond Optometric Society since 1985. Dr. Rainer is board certified to treat eye diseases including glaucoma. He has been trained as a co-manager on the latest refractive surgery techniques with some of the area's best surgeons and he has had LASIK himself in 2002. Dr. Rainer has been the eye doctor for University of Richmond sports since 1989.

Dr. Rainer has three daughters and two stepsons. He and his wife live in Richmond's near west end where they enjoy gardening, physical fitness activities and hitting many of Richmond's great restaurants and breweries. Throw in a little white water rafting, hand over hand hiking and some scuba diving for Dr. Rainer's thrill seeking side. Dr. Vakili was born and grew up in Richmond where he attended Mills E. Godwin High School before obtaining his Bachelor’s degree in Biology at Virginia Tech.  He went on to complete his doctorate degree at the Pennsylvania College of Optometry.  Dr. Vakili completed rotations in a number of different clinical settings including Mercy Medical Center in Baltimore MD, The Eye Institute in Philadelphia PA,  Drs. Farley, Polo & Ho in Colonial Heights VA, the James H. Quillen VA Medical Center in Mountain Home TN, and the Seidenberg-Protzko Eye Associates in Havre de Grace MD.  He was able to advance his clinical experience in areas of primary eye care, pediatric optometry and binocular vision related disorders, glaucoma, pre- and post-operative management of refractive surgery and cataract surgery, and the management of advanced ocular disease.  Dr. Vakili is an active member of the Virginia Optometric Association and the American Optometric Association.  In his spare time Alex enjoys traveling, cooking, staying active, and spending time with friends and family.

Dr. Gorman is a richmond native. He grew up in the west end and attended JR Tucker high school. Needing glasses and contacts from a young age made him develop a love of eye care. After high school, he decided to become a licensed optician. After a few years of working as an optician he decided to go back to school. He obtained a bachelor’s degree in Biology from VCU and attended Illinois College of Optometry in Chicago. He has special interest in helping patients fully understand their refractive and ocular conditions.
In his free time Dr. Gorman enjoys sampling local breweries, playing golf, and watching sports. Dr. Sebastian Azocar grew up in Stamford, CT where he was involved in Boy Scouts and community service organizations. His interest in optics grew as he experimented with camera lenses, magnifying glasses, and telescopes. He obtained his Doctorate of Optometry from the Pennsylvania College of Optometry and completed his training in primary care and ocular disease by working with specialists in Philadelphia at The Eye Institute and Ophthalmology Physicians and Surgeons, and the VA Hospital of New Haven, CT. While in Philadelphia he worked alongside leading experts from Wills Eye Hospital. There he learned the most current and effective ways to manage conditions including glaucoma and cataracts, as well as corneal and retinal ocular diseases. Dr. Azocar is passionate about providing individualized care for his patients by adapting care to their specific needs. It is important to him to ensure that each patient understands how their ocular condition applies to them so that they can navigate their diagnosis with confidence. Dr. Azocar is also a member of the American Optometric Association and the Virginia Optometric Association. When not at the office Dr. Azocar enjoys spending time with his wife and two boys. He has a passion for working on his car and for being handy by learning new skills for working in his yard and home.